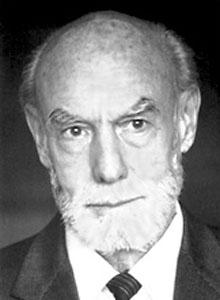 Biography by Dr. Antonio E. Puente in American Psychologist ( January 1972)
“For his now classic studies of sensory and motor integration, and his bold and original work with
the split-brain preparation, both simian and human. His early work is still definitive with respect to the organization of vision in the amphibian, independent of experience, and with respect to the restoration of motor control following nerve injury in mammals. It is not too much to say that his recent studies of patients with section of the corpus callosum are epochal. Following this disconnection of the two hemispheres, he has been able to communicate separately with the two halves of the brain of the same person; though only one half (the left) can talk, the right has some language comprehension and thinks for itself. Sperry has shown that separate thoughts and perceptions occur in the two halves, and in effect there are two minds now in one head. These are fundamental contributions to our knowledge of the nature of man.”

Biography
R. W. Sperry was borm August 20, 1913, in Hartford, Connecticut, and received his primary and secondary education nearby in Ehnwood and West Hartford. He attended Oberlin College in Ohio on a four-year Miller Scholarship where he majored in English literature and varsity athletics. Influenced by courses in psychology with R. H. Stetson and L . E. Cole at Oberlin, he switched from humanities to psychology for graduate work and obtained his MA degree in psychology at Oberlin in 1937. During these initial graduate years under Stetson, he obtained a background in theory and philosophy that provided a life-long guideline to subsequent work on the brain and behavior.

In 1938, he went to the Department of Zoology at the University of Chicago for doctoral work in order to study under Paul Weiss whose research findings were at that time posing a strong challenge to fiber connection theories of neural integration and raising issues basic to brain models for learning, memory, perception, and other higher functions that by now had become Sperry’s major interest. Other mentors at Chicago included Sewall Wright in genetics, Ajax Carlson in physiology, Moore in endocrinology, Gerard in neurophysiology, Kliiver in psychology, Polyak in vision, and Bartelmez in neurology. His doctoral research on reeducation following surgical interchange of nerves and muscles led to a basic correction of neurological doctrine on central nervous plasticity and the functional interchangeability of neuronal connections.
On a National Research Council postdoctoral fellowship, he moved in 1941 to the laboratory of K. S. Lashley at Harvard University where he began studies on the selective growth of brain connections. After the year in Cambridge, he moved with Lashley as a research associate to the Yerkes Laboratories of Primate Biology in Orange Park, Florida. The relative isolation of the Florida station was much ameliorated by laboratory colleagues such as D. Hebb, A. Riesen, H. Nissen, W. Young, G. Clark, R. Blum, and J. Semmes in addition to Lashley himself and the many visiting investigators. During World War II , he participated in an OSRD Medical Research project between Chicago and Orange Park on the surgical repair of nerve injuries. Meanwhile, evidence on the critical importance of specific fiber connectivity in brain organization had been consistently confirmed, and his interests turned to focus on the question of how the precise patterns of neural connections for
behavior become established initially in development.

He returned to the University of Chicago in 1946 as assistant professor in the Department of Anatomy, attracted by Bartelmez, Polyak, and the tradition of C. J . Herrick. In 1952, he became a Sectional Chief in the National Institute of Neurological Diseases and Blindness with a joint appointment as associate professor of psychology at the University of Chicago. By this time, the general issues on how a brain is able to inherit and grow its own functional wiring had been largely resolved, and his investigations turned to tests of connectivity versus electric field theory in perception and to studies on the corpus callosum that in particular appeared to present at the highest cerebral levels an outstanding exception to preceding conclusions on neural plasticity. The fine-scale microscopical surgical techniques used earlier were applied to the large brains of mammals to open new experimental potentials including the so-called split-brain preparation. From the late 1940s on, his studies were conducted also in sojourns at various Marine Stations at Bimini, Bermuda, Beaufort, Miami, Galveston Medical Center, and Sea Life Park in Hawaii, mainly on regeneration and selective growth of brain connections.

In 1954, he joined George Beadle’s group at Cal-tech to become the Hixon Professor of Psychobiology. He and his associates in the Laboratory of Psychobiology have since continued to pursue a broad range of projects focused around the growth of brain circuits, consolidation of the memory trace, and a variety of problems in cerebral organization. The latter came to be centered largely around “split-brain” procedures as a basic approach, first in animals and later used in a group of commissurotomy patients of P. J . Vogel and J . E. Bogen.

Sperry was cited by Oberlin College in their original group of Distinguished Alumni in 1954;’was elected to the National Academy of Sciences in 1960; and to the American Academy of Arts and Sciences in 1963. In 1969, he was awarded the Warren Medal of the Society of Experimental Psychologists. He is a member of many professional societies, has served as Chairman of the Experimental Psychology Study Section of the National Institutes of Health, on the Fellowship Committee of the National Science Foundation, on the Corporate Visiting Committee for Psychology at MIT, and on the editorial boards of Experimental Neurology, Brain Research, Neuropsychologia, and The International Journal of Neuroscience.